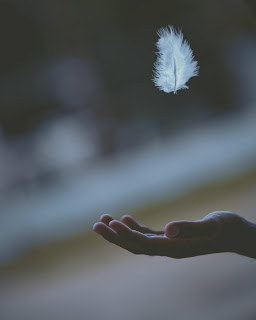 Sitting by the rock with a face of forlorn hope, the girl stared into the far misty horizon. A white wilted feather landed on her shoulder as though caressing all her burdens away; The feather then fell on her lap, her eyes lingering on it. Frail, yet regal; dull yet mystic, juxtaposing its own self in so many different ways. A smile crept on her face, so pure and tender, as though a revelation had hit her! Slowly, a sense of tranquility overpowered her sorrows like the sky at sunrise, devouring the darkness.

I stood by the rock-strewn banks of the little brook, devouring the soothing sound of water trickling down the cascade. The silence of the thicket was seemingly lulled by the gentle rustling of trees. The melodious chirping of birds coupled with the buzzing of insects seemed to be adding to the symphony. A moment of tranquility surfaced while I stood there spellbound; beholding the beauty of an empyrean dream, with solitude to keep company.

– Inspired from a breathtaking picture captured by @lucideyes

The author is an aspiring Chartered Accountant swaying between the world of words and numbers . She is an avid reader who writes sporadically (strives to be regular though) whilst hoping to create a ripple in the reader's soul. Contact at: woventalesbyme@gmail.com View all posts by Swetha Narayanan